In Seitai, “Steamed Towel Method” has been passed on to care for yourself. It is also called, “All-purpose Self Therapy”.

There are many Imoto-Seitai students who have spent nothing for their medical expenses for many years by using this method, along with Seitai exercises and How to utilize “colds and their benefits.”

On this article, I would like to tell you the way to do that. However, before that I must tell you the fact that “cure involves excretion.”

Consequently, the body waste which is supposed to be excreted would change the form and appear as a larger “symptom” someday after. If we continue to stop the symptoms, the body will gather the toxins and eventually, cause a lump.

Therefore, I must explain the “meaning of symptoms” to you before describing the “Steamed Towel Method.”

The meaning of symptoms

In Seitai, most of the “symptoms” are regarded as excretions of waste products, representatively symptoms of common cold. Many people take this as “being sick” and try to stop them. However, it can be said that the body that does not excrete toxins is considered as a “actual sick body.” The same goes for the body that does not react to the abnormalities is the “abnormal body.”

This is why a robust person who have never caught a cold often suddenly collapses from serious sickness caused by accumulated toxins.

In Seitai, it is said that “if you stop small illnesses, you will get a big illness.” In other words, excretion from time to time leads you to obtain good health.

Therefore, if something happens as a result of the Steamed Towel Method or the regular Seitai treatment, please do not panic and stop it. I have listed up the symptoms and their meanings below. If you feel uneasy even after reading this, please consult Imoto Seitai Leaders including me.

As a part of your body stiffens due to bruises, fatigue, etc., it gets cold because the circulation gets worse. Since it is partly in the state of approaching death, body attempts to restore the flow by expanding and refreshing the blood vessels by making eicosanoids: fever/pain-producing substances.

So basically if you cool down or stop the pain with painkillers, you will interfere the metabolism and more or less leave some stiffness in the body, which may eventually become “an old wound.” Meanwhile, warming up the part with Steamed Towel Method promotes the blood circulation as alleviating the pain. It may sounds odd, but this is because so the circulation is already improved that the “pain” is unnecessary anymore.

However, neuralgia that is not alleviated by warming up is not “excretion.” It may be said to be a real sickness.

Also you cannot apply this to head injuries, the place where the vessels are raptured.

“Heat is the power to live” as the baby is warm and the corpse is cold.

When body stiffens, the temperature fall or the circulation becomes worse, in other words, as it approaches death, those who have the power to live will get a fever to recover. Before that, the body feels chilliness as preparations to generate the fever and increases demand for the heat. Therefore, usually, we do not stop the fever until the process has completed. Once it is accomplished, the body regains softness, warmth, and circulation.

When a slight fever and/or chilliness is dragging on, since it means you have not been able to generate the heat well enough, Steamed Towel Method is also recommendable to stimulate the thermoregulatory center at the back of your head.

These are spontaneous exercises that shake to loosen the rib cage when ribs are stuck together.

A stiff rib cage can interfere with the dilation and contraction of the underlying organs, resulting in poor performance. Additionally, as there are many lymphatic vessels in the interstices of the rib, stiffness of the intercostal muscle inhibits the flow of the lymph.

So this is a demand by our body, when you let the cough or sneeze go freely, the ribs will be loosened and it will settle down naturally.

If you perform the Steamed Towel Method on the uncomfortable area, the course will proceed faster.

Conversely, if you eat too much during this term, it would harden the rib cage and prolong the convalescence. Eating less will also help progress.

Dripping runny nose is a reaction for moisturizing the dried, chilled lungs. Moisture is sent to the lungs when you breathe in. So, when you put a steamed towel on your face and inhaling the steam, the runny nose will stop. Whilst letting the mucus out thoroughly, the lungs will be refreshed and warmed.

When your digestive system is tired, the nose may get stuffed up, leading to the insensitivity of your nose. As a result, your appetite falls. If you take some medicine and continue eating more, your digestive organ will eventually be affected. Contrary, if you just take some break or reduce nutrients, your nose will be cleared before you know it.

On a spot with poor flow, the body intends to regain its circulation by causing itchiness and impel to scratch. Toxins which could not be detoxed due to diarrhea, etc. are often excreted from the skin. This also causes itchiness. If you stop this for a long time, the toxins would accumulate and your body may finally build lumps.

In Seitai, “If it is itchy, scratch it” is the golden rule. And if you scratch to emerge blood or pus, toxins are excreted more steadily, therefore, it is said to be “even better”. You will get back to the beautiful skin after they run out, but if you worry about it, apply the Steamed Towel Method to the affected area.

In case the toxins have seriously progressed, you may sense itching “deep inside of the body.” Steamed Towel Method is also very effective.

Usually, itching is reduced as soon as this method is performed.

Although they are considered as some type of excretion from the skin as I mentioned in the paragraph of “Itchiness,” if it is too painful to scratch, you can choose Steamed Towel Method on the affected area. Normally, people attempt to “stop” them with steroids, etc., but for some people, it is not easy to prevent the itchiness permanently. Even maximizing the steroid usage does not stop the condition most of the time. That is why many people try to excrete using the Steam Towel Method instead of using other kinds of medication.

They seem to gradually recover over several years, suffering from excretion of toxins that have accumulated over several years. Even so, if DNA has already been damaged by steroids, it is difficult to completely recover. So it would be better to get rid of toxins with a steamed towel from the very beginning.

When a person ingests rotten or poisonous food, sensitive one will vomit and excrete them immediately. If it does not make it in time, they will discharge it with diarrhea. Dull people would accumulate toxins without excretion. The quicker the better to dispel them, thereby, it will really help you to complete the excretion speedily and comfortably by applying the Steamed Towel Method on the vital point of liver which is called 痢症活点(Ri-sho-katten= detox accelerator).

Morning sickness that is prone to occur in pregnant women with bad stomach, is also the excretion of toxins.

People who have a stiff stomach from stress will be “dry heaving” as an instinctive action, squeezing it continuously, trying to loosen the stomach.

When people’s thoracic vertebra 5(T5) hardens, which links to the semicircular canals and perspiration, they may sometimes cause nausea by affecting the adjacent T6 which corresponds to the stomach(e.g. car sickness).

In Seitai, the above symptoms are regarded as excrement that should not be obstructed. We say it “All runnings are benign”. However, excretion which has been endlessly consuming your vitality regardless of applying the Steamed Towel Method can be said to be a “real disease” which is beyond the body’s natural healing power. Please consult your doctor in this case. 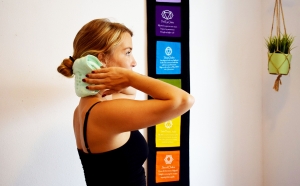 Well then, we are finally going to explain the Steamed Towel Method. Firstly, I will explain the principle of this method, followed by the fundamental and finally some precautions.

Principle of the Steamed Towel Method

Life is “breathing”. Breathing is to repeat absorption and excretion while repeating contraction and expansion. Humans pursue greedily about “absorption” such as nutrition and medicine, but as for excretion, they tend to lose interest. Because of that, we are prone to accumulate toxins in the body. Steamed Towel Method is the method to promote this “excretion” by stimulating with heat and steam, regain cell respiration, therefore, regain life force.

Specifically, it stimulates the sympathetic nerve and contracts the blood vessels by applying a steamed towel with “slightly higher temperature than comfortable”. As it gets cold, the parasympathetic nerve is stimulated, and blood vessels are dilated. By repeating this several times, it promotes the pumping action of the blood vessel itself. This significantly improves blood flow, excretion of waste products and metabolism. Obviously, the contract-expand movement of the surrounding cells is also promoted at this time.

Additionally, since your skin is directly exposed to steam, sweating would immediately begin as pores are opened. Along with perspiration, waste products are excreted from the skin. Therefore, Steamed Towel Method must be applied directly on your skin.

Basics of the Steamed Towel Method

2, Fold the towel in a size somewhat larger than the palm of your hand.

3, Immerse in water and squeeze it leaving moisture to the extent that water does not drip.

4, Heat that up. When it is too hot, let it cool to the temperature not to scold.

5, Apply it to the affected part. It should be higher than a comfortable, but lower than scalding temperature.

6, Warm up the same towel after it has cooled down  ( approximately 3 to 5 minutes).

7, Lay it on the affected area again. Repeat several times.

Notes on the Steamed Towel Method

Please be careful not to scold yourself. If the skin becomes dark or hard by continuing this method for days, please stop until the skin returns. If the temperature is too high, it causes low-temperature scolding.

The essence of Steamed Towel Method is “to cool naturally down over 3 to 5 minutes” and “to spend some time while warming the same towel again”. This wave of temperature change precisely induces the pump motion. Please distinguish this from the methods of warming up continuously with hot pack etc.

Do not practice this method immediately after bruising, or when there is a possibility of cerebral infarction, the blood vessel is torn. Other than that, please stop this when there is “discomfort” by applying a steamed towel. Presumably there is something inconvenient for your body.

When taking recreational drugs or alcohol, please restrain this method as the reactions are unpredictable.

It is impossible to write up all the details of Steamed Towel Method including the practical cases and the applications here. For more information, please click here:

The aim of the Steamed Towel Method is to maximise the natural healing power in the human body. If you could fully utilise this method, at least, you will find that most of the over-the-counter medicines is unnecessary.

Please believe your internal power and give it a try, and if you feel that it exceeds the limit of your capacity, just consult a doctor. After that, combined usage with medical treatment on this method will greatly help your recovery.

If you have any questions about this article, please contact Shimamura Seitai.

How to utilize “Colds and their benefits”?

How Seitai deals with Burnout
Scroll to top